The building known as Powell’s prefabricated house, Main Road, Campbell’s Creek, is architecturally significant at a STATE level. Although it has been moved and rebuilt a number of times and has lost about a third of its original structure, it remains a rare surviving example of an early single storey prefabricated building and demonstrates original Victorian design qualities. These include the rectangular plan and gabled roof.

Other original design qualities include the deep soffited eaves line at the front of the building with the addition of a decorative cut-out fascia; the prefabricated structure with its rectangular grid of 7 in x 3 in softwood with two skins of infill panels of tongue and groove boards; the sheeting of exterior lining between the frames with flat zinc (possibly galvanized iron) sheets, which are slotted between the vertical framing and nailed at close intervals with flat headed clouts to a tongue and grooved (probably Baltic pine) lining board; the unpainted brick chimneys; the single and double leaf doors with the segmental jambs; the paired, eight pane, inward opening casement windows on the front facade, with their upper panes divided by finely cut surface applied glazing bars forming Gothic arches, and the arched spandrels of coloured glass.

from Shire of Mount Alexander: Heritage Study of the former Shire of Newstead, 2000 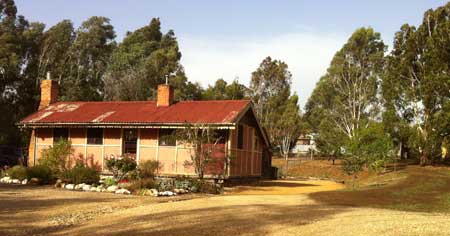